Part 2 of my swatch and review of the Emily de Molly August Collection. I have broken up the post into 2 parts because of the picture-heavy nature of swatches. This post contains the polishes Right of Passage, Subdued Delights, and The Maze and the Hightower.

Part 1 with Ashes From Flames, Dancing Through Sunday, Memories of Midnight, and Positive Contact can be viewed here. 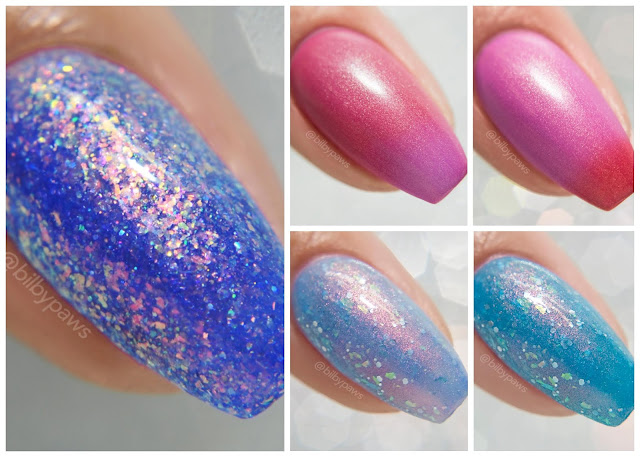 I was asked by the lovely Hayley of Emily de Molly to swatch the August 2018 7-piece collection.

The collection is a varied mix, with polishes ranging from thermals, magnetics, holos, and flakies... What they have in common is that they are all stunning, and as always, apply perfectly with a  2-coat formula.

I am breaking up the post into 2 parts because of the picture-heavy nature of swatches! This post will contain: Ashes From Flames, Dancing Through Sunday, Memories of Midnight, and Positive Contact.

Part 2 will cover Right of Passage, Subdued Delights, and The Maze and the Hightower. You can view it here. 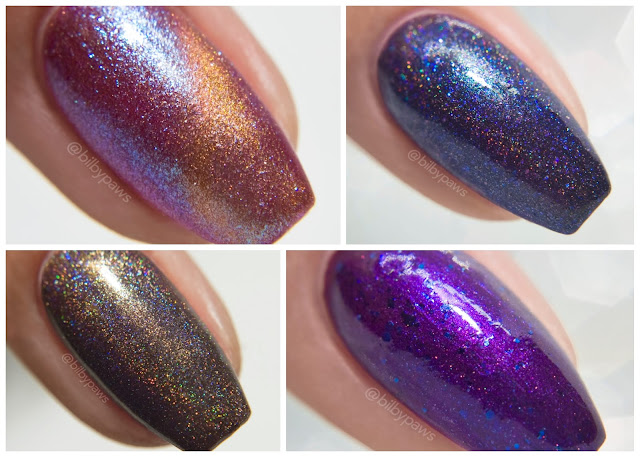 Mckfresh Nail Attire have drawn upon the film 'Labyrinth' (which was inspiration of their inaugural collection way back when!) for this month's Polish Pickup theme of Musicals and created You Have No Power Over Me! Purchase information will be at the bottom of the post.


Kate has drawn inspiration from this movie still and if you've ever seen this Bowie / Connelly 80s classic I think you will agree with me about it being bang on!

How to use Magnetic Nail Polishes - Tips & Tricks / a TIWSHTME post

A new TIWSHTME post, magnetic polish edition! If you're wondering what that appalling mouthful is, it is my acronym and tag for 'Things I Wish Someone Had Told Me Earlier', aka when I do a post compiling tips on how I approach a certain nail-related action that took me a while to learn. Basically a how-to guide, with things often not mentioned in tutorials. Here we go.


For the stripes (pattern 6), I moved it very slowly once down the nail. The flower (pattern 5) on the opposite side of the pen tool just needs to be held in position for 30 seconds once before lifting directly upwards so the design doesn't move on nail surface. For whatever reason the smaller magnet doesn't need to be renagnetised after design or top coat and still holds the pattern, I am not sure why.
P.S. The polishes used in this post are magnetic multichromes from Tonic Polish - Here comes the Sun and Drag Race if anyone is wondering!

If you have any questions or points that you are wondering about, feel free to drop a comment and I'll respond to the best of my abilities. Good luck!
Posted by Shauna at 3:43 AM 9 comments:

After the month of July off, the Polish Pickup is resuming in August with the theme of 'Musicals'. Emily de Molly have picked Disney's 'Frozen'. 3 Words, One Song is described as "a pale purple with strong turquoise overlay, iridescent flakes and silver holographic micro glitters."

Purchase information will be at the bottom of the post!

After the month of July off, the Polish Pickup is resuming in August with the theme of 'Musicals'. Femme Fatale have picked the classic Disney cartoon Aladdin! Agrabah is described as "yellow-toned warm terracotta with a strong pinkish glow and brilliant red iridescent shifting flakes."

Lots of photos of this polish, including it being used as a topper to follow. Purchase information will be at the bottom of the post!

Are you a fan of Unicorn Pee?

If you're wondering what on earth I am blathering on about, here's a link to a reddit thread about it. It's basically a famous pigment with a distinct red-to-green shift that originally appeared in the nail polish Clarins 230, and later a dupe by Max Factor called 'Fantasy Fire'. I own Fantasy Fire, which has since been re-released under the same name but without the 'pee'.

The nail polish community affectionately referred to this rare, gorgeous pigment as 'unicorn pee' or 'UP' for short due to its magical look. The pigment's sale has been discontinued as it started to be used in US currency I believe, although there are many similar pigments of a larger particle size available for sale. These are called 'aurora pigments' or 'UP dupes', and dupes with a different colour shift, like green to pink, or blue to purple, are termed 'UP siblings'.

However, some of the older polish brands have had some hoarded original pigment which always creates a real splash, and high demand, when released in new polishes. In the last year the Indie Polish world got very excited over the limited editions of Cirque 'Coronation' and Tonic Polish's 'Serendipity' (from their Unicorn Pee collection) which contained the OG pigment. I wanted to photograph them side by side to show the pigment in different colour bases.